This last weekend I competed at the youth divisional championships at Clubsport in Tigard Oregon. The comp was the 4th major competition I’ve been to at this gym, including two other divisionals and a nationals in 2006. Throughout all these competitions, I had never won difficulty or been old enough to lead at all, so the comp was an entirely new start for me.

One of the things I like most about divisionals is the fact that I get to see my friends from Washington and Oregon, like Alex Fritz, Sam Wolff, and Zan Bode. These guys have been climbing for a long time and we always have a great time and push each other to try to climb harder before we get to nationals.

This year, we drove up to Oregon, which took about 10+ hours so that we could drive down to Smith Rocks and go climbing there after the comp. The night before qualifiers, I went out to Olive Garden with Alex and Zan and then went back to the hotel and somehow ended up with a luggage rack wedged in between our two beds. Probably as a result of playing Jungle Speed in my room with Alex, Zan, Sam, Charlie Andrews, and Eric Sanchez.

Note: If you don’t know, Jungle Speed is the best card game ever invented. If you haven’t heard of it, imagine matching card games combined with spoons and full-body wrestling. It’s intense.

Qualifiers were flash format, which meant all climbers could watch anyone else in their category climb before they went. I went right after Alex, but I preferred not to watch him climb, letting me focus on my own climbing without comparing ourselves. I sent the first climb fairly easily, but fell a couple holds short of the finish on the second climb. This was still enough to put me in first. In speed, I didn’t go quite as fast as I probably could’ve, and ended up in 2nd place to Alex by 0.1 seconds (I got 10’s on both walls). Charlie and Sam were both right behind us in speed and difficulty, and we all knew it was going to come down to finals.

The next day, I woke up for finals all ready to go. I was going last in my category because I had placed first the day before so I had some time in iso to warm up and get ready. The final route went up the main lead wall on the right (which we had been expecting) and was mostly jugs till it turned the headwall and started a slabby crux on big green huecos. I had no idea what I was doing until I actually climbed. I ended up making it past the jugs and all the huecos to the very last crux on two sharp crimps. Highpoint for both the male A and Junior categories, I was pretty happy about my results. 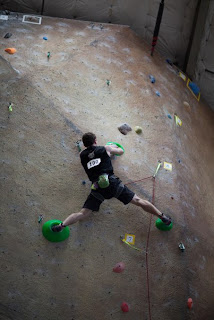 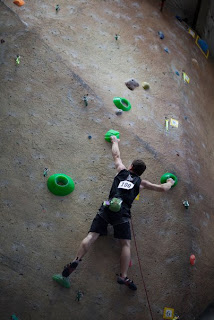 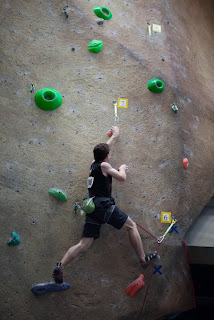 (all photos: Eric Wang)
By the time it was time for speed climbing, I was getting pretty psyched to climb, especially since I was sitting in 2nd place behind Alex. I knew I could be faster, but at the same time, I knew he was going to bring it too. The first lap before we switched I hit 7.8 seconds on, which was 3 seconds faster than the day before! Alex was only a little behind, so it all came down to the last lap. He got 9 seconds on it, but I missed the top box, disqualifying me. Dammit. Oh well. Alex deserved the win today. He’s gotten FAST.

Overall, I was pretty psyched on the first win at Clubsport in difficulty, but I also need to work on speed if I want to do well at nationals. It was a great weekend hanging out with everyone and playing Jungle Speed. Time to get training for nationals.