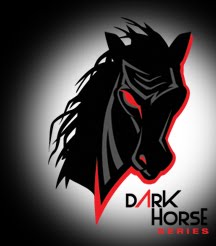 Although the Heart of Steel has since been cancelled, the Dark Horse is still in full swing in New England, put on every year by head setters Josh Larson and Dave Wetmore. Watching the highlight reels made the events look insane - big dynos, drop-down moves, backwards mantles, swinging on non-climbing holds, you name it, it was probably there. It looked awesome.

And now, I'm here, going to school in Boston. These are now local competitions for me. PSYCHED.

From the very first day of classes, I found myself counting down the days to the first Dark Horse competition in Everett. As the weeks, then days, then hours ticked off until go time, I got more and more excited to see what Josh and Dave had in store.

On the morning of qualifiers, I headed over to Metrorock with my friends Alex and Keila (also freshmen at Northeastern). The qualifier problems were hard - I barely ended up squeaking into finals with the strong field that showed up. However, I could already tell just from the atmosphere in the room that finals were going to be intense. People came in from about 10 different states, and even a van with some french Canadian climbers drove down for the event. We never used to get that big of a range at any competition back home! Coming from the west coast, where bouldering comps are laid back and finals are sort of a mystical idea that is rarely put into practice, it was exhilarating to know that my efforts in the qualification round could potentially move me on to finals.

After qualifiers ended, I waited around to see if I had made the top six male spots that would move on to finals. However, Dave and Josh decided to let in two extra spots to bring the finals total up to eight. This turned out to be extremely lucky for me, since my score put me in seventh. Also qualifying for the finals were Nick Picarella, Vasya Vorotnikov, Ben Hoberg, Mike Feinberg, Andrew Kim, Sebastien Lazure, and David Bain.

As I warmed up again in isolation for finals, I came to realize how much more amped up everyone was for the event. Even my roommate Isaac came out to watch the comp! Right before I climbed, I could hear the roar of the crowd as competitors worked their way up the problems behind me. The energy that I felt was on a completely different level than most competitions I've ever competed in, especially back home. I popped in my headphones, switched on the "get psyched" playlist, slipped into my trusty Team 5.10's, and chalked up. Before I knew it, "climbers begin climbing" echoed around the crowded arena from the PA and I turned to face the wall.

In a word, the finals problems were INSANE. Problem 1 consisted of a huge Dark Horse volume to start, followed by several large cubes that you had to carefully balance over before dynoing around the corner to a ring jug. The next move tripped nearly everyone up, as you were supposed to do a big sideways dyno to standing position on top of a giant ball.

Number 2 was short and powerful with another huge dyno to start, followed by crazy finish match. I was able to get the first move with about 30 seconds left, but I had used most of my energy trying the first move so many times that I ended up falling while going for the next hold. Only Mike Feinberg sent this one by throwing a bicycle on one of the lower volumes.


Problem 3 was by far my favorite of the entire finals round. It started with your back to the wall, then was followed by a huge double-clutch dyno past a mediocre sloper to a jug. I attempted the dyno for most of my allotted time, trying to get the right body positioning before finally sticking the hold. From there, the climb went back onto the sloper that you initially dynoed to, then up onto a huge star feature before cumulating in one last hard move to the top. I fell trying to reach the hold on the star, which ended up being the 2nd highpoint on the route. Later in the comp, Vasya was able to pull through and was able to reach the finish. Inspiring! 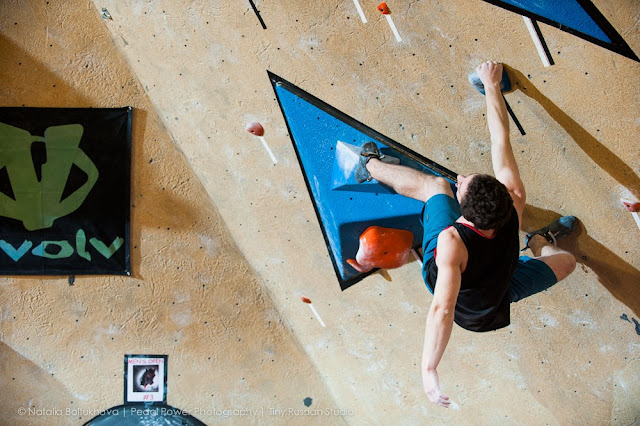 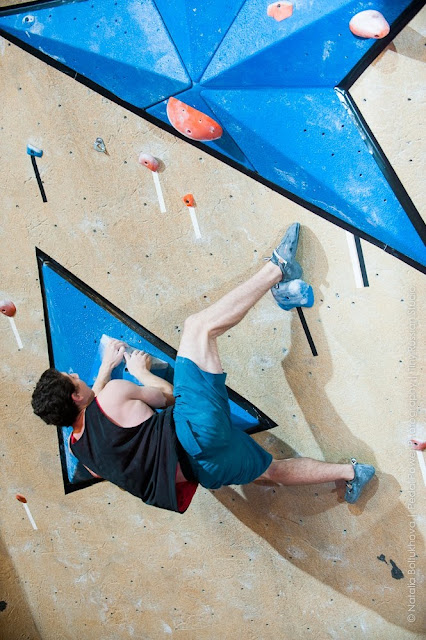 In the end, I came out in 4th place after Vasya, Mike, and Ben Hoberg. I believe Ben and I tied, but I had many more falls, (especially on #2) so that countback factor brought me down one spot. Nevertheless, I had a blast at my first big east coast pro comp, and I can't wait for the next one! DARK HORSE!

All photos courtesy of Natalia Boltukhova


Dark Horse 2013 Series 4 Round 1 Highlights from Louder Than Eleven on Vimeo.
Posted by Josh Levin at Thursday, November 08, 2012 No comments:

Earlier this month, the IFSC Lead World Cup kicked off its American debut of the season in Atlanta, Georgia. I qualified for this event by making the finals at the SCS Open Nationals a few months ago, making this my 3rd World Cup appearance. Having performed well enough to qualify for the semifinals the year before, my hopes were high in terms of improving my result and potentially having a shot at making it into finals.

Training for this year's World Cup required a much different approach than I was normally used to, considering my full engineering courseload at Northeastern University I had to balance at the same time. However, the people over at Metrorock are awesome and I was able to catch some belays from friendly folks who were kind enough to let me run some laps on their project... Kinda felt bad about that. Oh well.

Heading into the competition, I felt decently strong given that I had just gotten over a severe cold brought on by my first midterms of the year. Nevertheless, my last training session on the "treadwall" that we have in our campus rec center proved to be a valuable asset, and I felt as prepared as I needed to be in the few days before flying down to Atlanta. Luckily, one of the youth climbers from Atlanta, Jeremy Heit (and his family), offered to let me stay at their house for the competition, so I didn't have to go through the trouble of booking a room and trying to pick up rides over to the gym. Thank you, Heit family!

When I walked into isolation for the competition, I felt right back in my element. The cool thing about competing in World Cup competitions is that the atmosphere is much more relaxed than any youth competition, which is crazy because you can look around at any given time and the person on both sides that you're warming up next to was on the front cover of that one climbing magazine last month. In total, there were about 65 competitors, which made for a small-competition ambiance. One of the cooler aspects was being able to chat with Jakob Schubert (reigning World Champion, nbd) on his recent win in Paris, and also got his side of the story on his even more recent disqualification in Puurs, Belgium. He felt that it was an unfair call and that he should have been awarded a yellow card, but that all he needed to do was perform well in Atlanta to move on.

When I finally stepped onto the wall in qualifiers, I felt a little nervous, but climbed decently well on the first climb, making it past the overhanging portion of the wall and onto the very technical slab. On qualifier 2, I didn't climb nearly as well after I made a poor rest about halfway up, but still was able to take the very last spot into semifinals after an two revisions of the scores and an appeal had me one spot out (lots of anxious waiting and deep breaths ensued).
Semifinals! After making it to this stage of the competition in Boulder last year, I was beyond psyched to have made it again. This time, my goal was to improve upon my placement from the year before, where I placed 23rd. After a quick preview, I set out on the extremely overhanging climb, making sure to climb quickly through the bottom section. My tactic worked well through some big holds and a sick campus section, but I tried to rush a tenuous section after a rest without taking time to breathe and assess the situation, and I fell while trying to pull a gaston. In the end, I placed 21st, my highest at a World Cup yet! It definitely pays off to go first in an onsight round - there's way less pressure.

After grabbing a bite to eat at the famous Little Cuba restaurant next to the gym (try their Cuban Sandwiches or Lucy lunch special), I headed back for finals with a bunch of US athletes, including Ben Tresco, Noah Ridge, Kyra Condie, Thomas Pitzel, Carina Claassen, Delaney Miller, and Michaela Kiersch. Finals were fantastic as usual, and it was amazing to see the world's best climbers come destroy routes on the walls that I know so well. Especially amazing was Jakob Schubert's climb, as he nearly fell off one section, only to calmly continue on and send the climb. Huge congrats to Ramon Julian and Jain Kim for winning the World Cup as well.
Inspiration from the competition now carries me through school every day. Whenever I find myself drifting off in my calculus lecture or doodling in my engineering design course, I often find myself thinking of how I could be training to compete on the World Cup circuit along with the climbers who I just witnessed. This dream needs to be realized! If there's a will, there's a way. Perhaps after I earn my degree I will pursue this course to the fullest. Until then, Dark Horse competitions will have to be enough I suppose...

Posted by Josh Levin at Thursday, November 08, 2012 No comments: