Two weeks ago, I headed off to Boulder, Colorado (again) for my second World Cup of the season! I had a great time and placed a respectable 23rd. I feel that I did well for how stacked the competition was, but I know I could definitely have done better.

The weekend started off by flying out with my mom to Denver on Friday morning, then driving out to Boulder that afternoon for the opening ceremonies. The competition was kicked off in grand style by a parade straight through downtown Pearl Street with all 13 National Teams present, and a bongo-playing marching band leading the way. Reminded me a lot of France a couple years ago... gotta love Boulder. The parade wrapped up in a local tavern with the head of USAC and some IFSC delegates speaking, and free food for everyone. Afterwards, I hung out my good friends Alex David Johnson and Ben Hoberg as well as the Canadian National Team for a while before heading back to our hotels.

The competition that followed was incredible. The next morning, I climbed both of my qualifier routes, climbing well on my first one, and decently well on the second one, high enough to put me in the top 26 to move on to semifinals the next day! I was pretty happy with being able to move on, considering I hadn't even gotten past qualifiers at my first World Cup in Briancon, France. 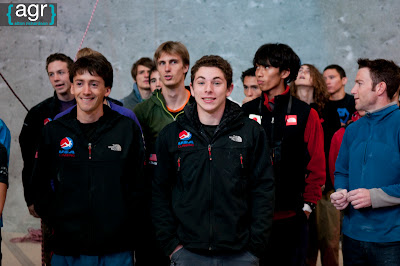 Psyched on making it to Semifinals!
Photo: Alton Richardson
The qualifier routes were really fun and bouldery, with many distinct cruxes all the way up. It was very interesting to be climbing on World Cup-style routes with American holds and moves. After speaking to one of the routesetters after the comp, Mike Helt, my suspicions were confirmed when he told me that it was a vastly different style of routesetting that was unique to that specific comp. In Europe, the routes start off hard and stay hard, with some difficult sequences all the way through. At typical US comps, the routes progressively become harder and harder as you go up the wall, with distinct crux moves and the obvious "crowd pleaser" moves that make American routesetting such a spectacle to watch, not to mention climb. It was definitely intriguing to see how the hybrid of European influence combined with American holds, power, and showy moves created some of the most fun routes I have ever climbed in a competition. Awesome job, routesetters!

The next day, I headed into isolation for the semi-final round of the competition. It was pretty cool to be in iso with some of the world's top climbers, but at the same time I tried to get myself psyched up to climb as much as possible. When we finally got to see our route during preview, we were not let down. The climb was a super powerful line straight up the main headwall, with multiple volumes weaving in and out of blue Teknik holds. The top looked formidable as well, as the last few moves were giant reaches on tufas that were spaced at least five feet apart.

When it was my turn to climb, I put on my shoes, chalked my hands, took a deep breath, and grabbed the starting holds. I made it past the first few cruxes, but right before the intimidating roof section, I fumbled a clip, lost my composure, and fell. As I was lowered quickly to the ground, I realized I should have waited an extra couple moves before clipping, which would have saved me the effort of trying to clip from so low. Oh well. 23rd place wasn't too bad for my first year of World Cups ever. 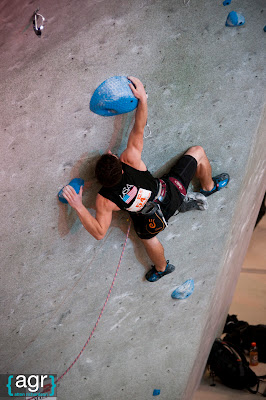 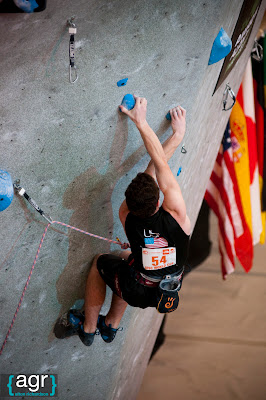 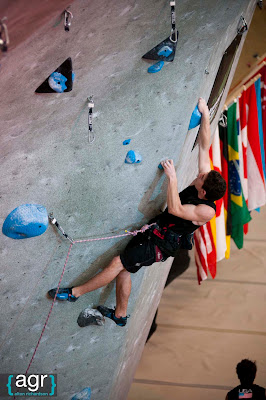 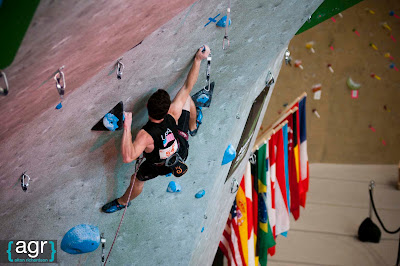 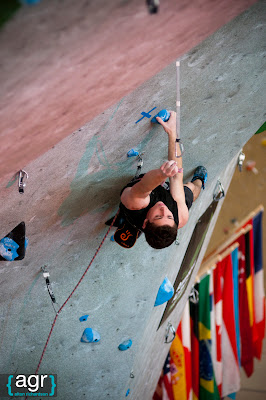 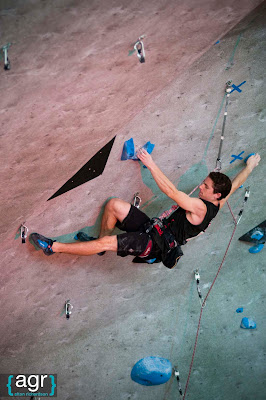 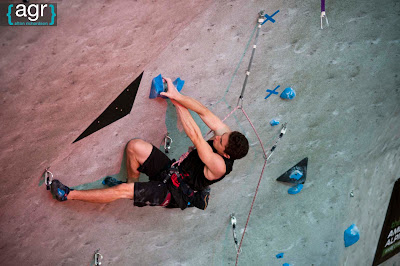 On the bright side, I did get the opportunity to watch the finals later that night. Getting a chance to see the top 8 men and women in the whole WORLD climb on the biggest stage of professional climbing is not something you get to see every day. Although the American Team generally got destroyed by the incredibly strong European teams, we did manage to get perennial crusher Sasha Digiulian and Boulder's own Matty Hong into finals!

The finals routes looked INCREDIBLE. The women's route snaked up the right side of the main wall with some crazy-hard sequences thrown in, while the men's was running up the left wall, looking equally impossible with a huge dyno in the middle and what looked like a no-feet, forced 360º spin in the middle of the roof.

Matty barely squeezed into finals in 8th place, meaning that he was the first male competitor to go. As soon he walked out onto the main floor, the entire crowd shook the roof with deafening yells and cheers. I thought I'd heard loud before... I was wrong. It was without a doubt the loudest crowd I've ever heard in my whole life. This is including when I saw Joe Pavelski score the winning goal in overtime in the Stanley Cup playoffs to a sellout crowd of over 17,000 in San Jose. That loud. For over 5 minutes, the crowd yelled itself horse for their hometown hero (myself included) as he pulled through the bottom crux, cruised the giant dyno, and pulled off an amazing rose move through the volumes section. When he came off several moves later, the crowd gave him a standing ovation the likes of which I don't think I'll ever see again.

The rest of the finals were incredible too. Sasha did very well, coming off in the same area as everyone else and still putting her in a respectable 7th place. Johanna Ernst of Austria dominated the women's field, coming off within a hold or two of the top. On the men's side, fellow Austrian Jakob Schubert pulled off an unbelievable climb to give himself his 6th consecutive World Cup win in a row. (*This past weekend he won his 7th in a row in Amman, Jordan, which no professional climber has EVER done before. Nice job dude!!) I got the chance to chat briefly with Jakob after the comp, and when I asked him about the final climb, he told me that when he got to the 360º spin, he initially didn't know what he was going to do, but went with his gut instinct and gave the crowd even more reason to cheer him up the wall by completing the spin with one arm. When the president of IFSC, Marco Scolaris, spoke to the crowd after the comp ended, even he acknowledged that the turnout in Boulder was "the hottest crowd on earth!" 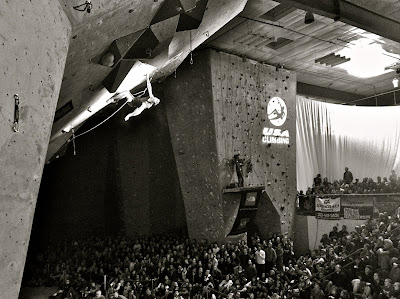 Jakob Schubert in Finals
Photo: Josh Levin
After the comp was over, I hung out with Alex, Ben, and the Canadian Team one last time before heading back to my hotel for some sleep. The next day, I shadowed some classes over at CU Boulder, which turned out to be a really good experience. I could definitely see myself going there now for college, although there are many other schools to consider out there as well.

With the weekend over, I headed back home. This competition showed me how much fun it is to compete, and how much further I still have to improve to do well in these competitions. I look forward to competing in the next World Cup in the US next year in Atlanta. Until then, I have a lot of training to do!

Check out this sick video and write-up from the LT11 Crew of the competition: