Training with a Champion

For the past month and a half, I have had the unique privilege of training with one of the best female sport climbers in the world, Charlotte Durif. If that name doesn’t ring a bell, simply enter her name into any respectable search engine and you’ll get a long list of career accomplishments, sponsor lists, her own professional website, and countless photos and videos of her being an all-around boss at competitions and outdoor crags. She’s also a five-time World Champion and is one of the few women in the world to have climbed 9a (5.14d). I’ve watched her compete at World Championships and World Cups for years, but never imagined I’d one day get the opportunity to train alongside her.

I first was introduced to Charlotte when I traveled to Atlanta last September to compete at a sport climbing World Cup held at Stone Summit, the largest indoor climbing gym in the US. After the competition, I found myself catching up with one of the French National Team coaches, with whom I had traded jackets with the year before. Upon hearing that I was going to school in Boston, he called Charlotte over and introduced me to her. It turns out that the Ph.D program she was enrolled in allowed her to take a 1-semester internship doing nuclear physics research at MIT, and she was looking for someone who knew the area decently well and who she could potentially train with.

After getting over my initial reaction (ohmygodimtalkingtoCHARLOTTEDURIF) and chatting with her for a bit, I discovered she was very amicable and spoke English quite well. I agreed to keep in contact with her over the next few months and meet up with her soon as she got to Boston in January.

When she finally arrived, I met her at the airport and helped her move into her dorm at MIT. From then on, we’ve been training several times per week as our work schedules allow, going to Metrorock and doing lots of endurance training on the lead and bouldering walls at the gym.

Climbing with Charlotte is inspiring. She climbs with such a calculated efficiency in her movements, as each hand and foot placement seems deliberate, precise. Her ability to read routes is nearly impeccable, (she can find kneebars and rests on almost every hold) and she never seems to get pumped. It is clear from her climbing style that she can dominate any competition that she sets foot in, and watching her in tricky roof sequences is like observing a choreographed dance routine flawlessly executed 50 feet over my head.

During one such training day, I was attempting to send my 5.13 project in the Metrorock arch, which I had fallen off the middle dyno on my first try and was getting really pumped sticking the lower and finish crux moves. She then proceeded to casually walk the climb twice in a row, and then gave me beta for a turn-around move that made the lower crux substantially easier. I tried the move, fought through the upper crux, and BARELY sent. It felt great to finally complete my project, but I was even more impressed by how casual Charlotte had made it look. Freaking europeans. Wow.

The great part about training together is that she we will subtlety attempt to outdo each other, always going for that one extra lap and pushing each other to keep a quicker pace through the route. She’s also really fun to talk and joke around with, and she’s a great addition to the Boston training group consisting of Shane Messer, Katie Lamb, Josh Larson, and myself.

Anyways, I believe training with her has greatly improved both of our climbing styles, (I push her to climb faster and be more gymnastic with her moves, she shows me how to climb smarter) and has prepared both of us extremely well for the SCS Open Nationals this weekend. She’s easily one of the strongest sport climbers I’ve ever seen, male or female regardless. Will this be the first time that the United States will see a French National Champion? I’d certainly like to think so. 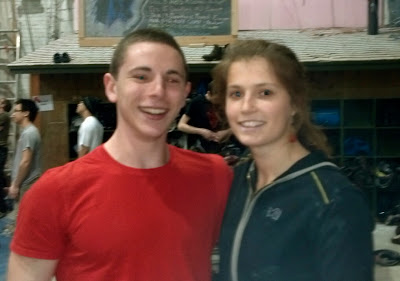