Last weekend, I competed at the 2013 Dominion Riverrock Boulder Bash. I’ve been watching videos of this competition for years, and man did it look cool. After experiencing the event firsthand now, I can say with absolute certainty that it is the sickest, raddest, most awesome bouldering competition I have ever competed in. EVER. I guess you could say I had a good time.

Dominion Riverrock has been going on for several years now as an outdoor sports and music festival located on the James River in Richmond, Virginia. Two years ago, the event organizers decided to add a bouldering component, which quickly turned into the most epic climbing competition in the history of mankind under the direction of local routesetter Brent Quesenberry.

Brent’s vision was that instead of boring ol’ climbing walls for competitors to test their skills on, competition routes would ascent giant multicolored volumes suspended in an overhanging steel cage. What evolved from there became legendary: the Dominion Riverrock Boulder Bash.

Footage from 2011. Does this get you psyched enough?


This year, I headed out to Virginia to see how well I could compete against some of the best boulderers in the country. I was lucky enough to be able to stay with one of my good friends from the area, Riley Varner, whose family hosted Dalan Faulkner and Kyra Condie along with myself.

The competition ran over the course of three days, with bouldering qualifiers, semifinals, and finals occurring on Friday and Saturday, and speed bouldering all day on Sunday. In between rounds, Kyra, Dalan, Riley, and Danyelle (Dalan’s sister) were able to walk around the event, taking in all of the other competitions being held (slacklining and the dog jump contest were personal favorites). It was really cool to see these events happening concurrently with the climbing comp; it gave the spectators something to do all day long and kept them from getting bored from watching a single event.

The competition itself ran smoothly given the weather constraints of the weekend, as the only disruption was that second qualification round was postponed for a couple hours due to a thunderstorm. The problems were extremely cool to climb on, as both the left and right walls had completely different styles: The right wall favored more sustained, pumpy moves, while the left wall’s moves on an enormous star feature were much more gymnastic and bouldery since the overall terrain was much shorter due to the angle not being quite as severe.

After the qualification and semifinal rounds, I found myself sitting a very solid 5th place heading into the final. I knew I would have to bring everything in order to move up in the competition. When we went out to preview the final climb, I knew I would be beyond psyched even if I didn’t make it very far. The climb traversed the right wall and incorporated nearly every single volume, with lots of dynamic movements and toehooks the entire way. It looked awesome.

When I finally turned around to face the wall to climb, I realized the crowd was way bigger than I initially thought, which put me a little on edge, but also gave me more inspiration to try my hardest. I ended up getting farther than I expected, coming off in the middle of the last overhanging bulge with an extremely hard pinch sequence. The highpoint that I achieved was only beaten by Jimmy Webb, the eventual winner of the competition, but Vasya Vorotnikov and Rob D’Anastasio both matched my highpoint and had a better semifinal score, which put me in 4th place. I was stoked!

The next day, Kyra and I competed in the speed bouldering competition, which happened to be a new event at Dominion Riverrock this year. The competition was essentially a speed campusing event on the left wall, and was much more laid back than the bouldering event of the previous days. I figured not many people would show up to compete, but he number of competitors was increased dramatically by the added cash incentive of $500 for the overall combined best placement from both the bouldering and speed events.

The speed competition went smoothly as well, with the only minor glitch being that one of the photographers stepped on the timing system cable at one point, pausing the comp for 15 minutes while organizers reconnected the wires. Incidentally, the timing system that was used at this event was made by one of my friends from Colorado, Landon Cox. His laser timing devices (Twin Dolphin Timing) have been used at USA Climbing events for the past few years, and it was great to see his products at this event as well. 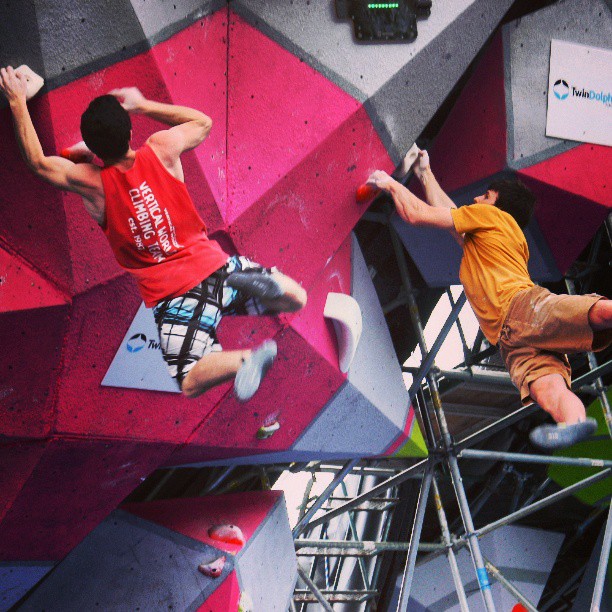 I ended up winning the speed competition ahead of Vasya and Jimmy, which meant Vasya and I tied for second overall with Jimmy coming ahead with the overall win. Below is some GoPro footage of the speed event, with the Twin Dolphin timers featured as the start mechanisms. I highly recommend them for any high-level event!

On a side note, this was my first time using the Five Ten VXI’s in competition, and they performed way beyond expectation. If you haven’t heard of them, they are an upgrade to the current Team 5.10 model, but are much more of a combination between the Teams and the old Projects, as the shoe is one of the softest climbing shoes I have climbed in. This gives them the ability to toe in on extremely overhanging terrain by allowing your toes to dig into any foothold and keep your core engaged through any sequence of moves.

The rubber used is a new hybrid variation called MI6, which was used by Tom Cruise in the new Mission Impossible movie as he ascends the Burj Khalifa. After testing my new VXI’s on my home window, I confirmed this theory. This rubber is literally sticky enough to stick to glass. The stickiness wears out after a couple of days of being subjected to chalk and dirt, but after a quick scrub with a washcloth they are back to their old stickiness, good as new.

The VXI’s also bend much more than their predecessors, which gives them an added advantage of being capable of toehooking virtually any surface. This was especially noticeable on the final climb, where a key double-toehook allowed both myself and Jimmy Webb to power through a move that stumped many other competitors. There’s no doubt about it: The VXI’s are revolutionary.

Thanks for reading! I would also like to thank both of my sponsors, Five Ten and Metolius, as well as my parents for helping me continue to compete at amazing events like these. This weekend I will be heading back to Hadley, Massachusetts for the 2nd annual Ring of Fire competition. Stay tuned!